WikiShrek
Register
Don't have an account?
Sign In
Advertisement
in: Characters, Characters from Shrek Forever After Credits, Female,
and 13 more

Cinderella (voiced by Amy Sedaris) is one of Princess Fiona's friends who is obsessed with cleanliness and tidiness after doing a great deal of housework for her stepmother and stepsisters (revealed to be Doris and Mabel).

When Lord Farquaad is deciding which princess to marry so that he can become king, Cinderella is one of his choices. At Shrek and Fiona's wedding, Cinderella fights with Snow White to catch Fiona's bouquet. During Donkey's "I'm a Believer," she is seen dancing with one of The Seven Dwarfs as well as with Monsieur Hood and the Merrymen.

In Shrek 2, Cinderella is briefly mentioned while the Fairy Godmother is explaining to Shrek that ogres do not live happily ever after. Her star home is also briefly seen when Shrek and Fiona are going to the Far Far Away palace. There are also 2 pictures of her in Fairy Godmother's factory (which can be seen more clearly in the Far Far Away Times special feature on DVD).

Her design in the portraits was used for her in-game model in the Shrek 2 video game. Unlike the movies, she is portrayed as an absent-minded valley girl. A mission in the game has you protecting her from peasants looking to rob a celebrity.

Cinderella appears more prominently in Shrek the Third, now wearing a light blue-silver dress. She becomes friends with Princess Fiona, Queen Lillian, Doris, Snow White and the Sleeping Beauty prior to the events of the film. She first appears in Fiona's baby shower, which Prince Charming interrupts when he takes over the throne. She escapes with Fiona, Queen Lillian, Doris, and the other princesses. She is later betrayed by Rapunzel and imprisoned with others in a dungeon. They escape and head towards the castle. After Snow White tricks the guards, they enter the castle's grounds and avoid the knights on guard. While trying to get into the castle, Cinderella hurls her glass slipper like a boomerang at a knight, knocking him out. Cinderella, with the other princesses, Doris and Queen Lillian, arrives just in time to stop Prince Charming from killing Shrek. After Charming is defeated, she is seen talking to the other princesses, Doris and Queen Lillian in the background.

Cinderella was mentioned in a couple of episodes in the series. Her first was in "Celebrity Fairytale couples", being paired with the Pied Piper. Their couple name was "Cinder Pied Piper Ella". Later she would be a major subject in "Team Cinderella or Team Snow White?', after Prince Charming had split with her in order to date Snow. Her team (#teamcinder4ever) was started by Donkey in order to have her get back with Charming.

Cinderella's first appearance, she has dark blonde hair, with green eyes and pale-ish skin. Her hair is also tied in a normal bun. In Shrek the Third, she has curly strawberry blonde hair, blue eyes and fair skin with rosy cheeks. She always has her hair in a classic tight updo tied at the back of her head. She wears a tiara. She does not have any flowers or other decorative accessories in her bun.

In the first film she wore a long golden dress (in mirror's image) and another yellow (in the end). In Shrek the Third she wore a long silvery blue dress with a big collar and a silver tiara, several rings and glass slippers, which she later used as weapons.

Cinderella appears to be a kind and caring princess like her traditional counterpart, though she is rather ditzy and somewhat skittish. Due to her troubled youth which included slaving away for her stepfamily, she appears to suffer from obsessive compulsive disorder. Moreover, she appears to be a neat freak, as shown when complaining about the griminess of the sewer even though survival is more important. During her imprisonment in Shrek the Third, while cleaning the floor, her reflection in the soap talks back to her, which indicates that she has Mirrored-self misidentification, a delusional disorder. Later on, like the other princesses, she uses her initiative and becomes an independent and active woman.

In the first film, it was revealed that she was mentally abused and a former shut-in. She likes sushi and hot tubbing anytime. Her hobbies include cooking and cleaning for her two evil sisters.

Cinderella seen at the ball in the Magic Mirror.

Cinderella grinding her glass slipper in preparation to assault in Shrek the Third. 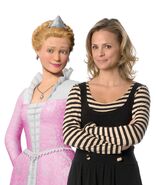