Crazy Larry is a character in Shrek 2: The Video Game. He is a leprechaun whose most famous speech was "There once was a motley crew, who asked if I would let them through. I'll open the gate for you and your mates if you will bring me... fairies."

In the Shrek 2 video game, Crazy Larry is first seen at a gate and says that he'll let Shrek and the others pass if they bring him fairies. They do so and Crazy Larry lets them through, as well as thanking them for helping him out. 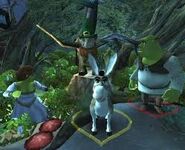