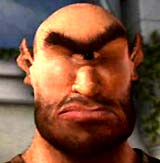 A Cyclops is a mythological being with one eye. A cyclops appeared in Shrek the Third and he also had a daughter.

In Greek mythology and later Roman mythology, a cyclops (pronounced /ˈsaɪklɒps/; Greek:Κύκλωψ, Kuklōps), was a member of a primordial race of giants, each with a single eye in the middle of its forehead. The classical plural is cyclopes (pronounced /saɪˈkloʊpiːz/; Greek:Κύκλωπες, Kuklōpes), though the conventional plural cyclopses is also used in English. The name is widely thought to mean "circle-eyed".