You may be looking for dragons as a species. See Dragon (species).

Dragon is a green-eyed, red dragon and reoccurring character in the Shrek franchise. She is a former antagonist who eventually befriends the main cast. She is also Donkey's love interest and eventual wife.

Dragon first appears while guarding the derelict castle, which serves as Princess Fiona’s prison. It can be assumed that this is her long-time permanent domicile, since the castle houses a large hoard of treasure and is littered with bones, armor, and weapons of the many unsuccessful knights who tried to rescue Fiona.

While searching for the princess, Shrek and Donkey become separated within the castle. Dragon chases after Donkey after he accidentally awakens her, and nearly eats him before Shrek intervenes. Dragon uses her tail to throw Shrek, who ends up landing in Fiona's tower. Dragon traps Donkey on a stone pinnacle, intent on eating him like so many other intruders. Out of desperation, Donkey smooth talks Dragon with compliments, causing her to become infatuated with him and spare his life. Dragon grabs an unwilling Donkey with her mouth and hauls him back to her lair.

Back in her lair, Dragon has Donkey wrapped up in her tail and flirts with him persistently. Her advances initially appears quite one-sided, but this does little to dissuade her. Before she can kiss Donkey, Shrek intervenes by dropping from above and taking Donkey's place. Dragon's kiss ends up on Shrek's butt, infuriating her, but before she can react Shrek manages to collar her with the chandelier from above. Dragon chases after Shrek, Donkey, and Fiona throughout the halls of the castle, the chain of the chandelier tailing behind her. In order to prevent Dragon from pursuing them across the bridge, Shrek pins the chain links with a sword. This gambit saves Shrek, Donkey, and Fiona as they flee to safety. Dragon is left alone and devastated.

Later, Shrek and Donkey part ways after finishing their quest, and Donkey discovers Dragon crying by a brook in the forest. Feeling sorry for her, Donkey overcomes his initial hesitation and approaches Dragon, and the two reconcile. Dragon helps Shrek and Donkey prevent Fiona’s wedding to Farquaad by flying them to Duloc. Upon landing, Donkey tells Dragon to have fun and so she runs off to chase the local guards. However, Shrek’s failure to rescue Fiona from Farquaad’s clutches prompts the ogre to whistle for Dragon. Dragon, with Donkey riding on top of her, intervenes by breaking through a glass window and devouring Farquaad. This restores peace, with everyone present seemingly glad to be rid of Farquaad.

During Shrek and Fiona’s wedding celebration at the swamp, Dragon dances with the rest of the fairy tale creatures. As the newlyweds leave in their carriage, Dragon catches the bouquet thrown by Fiona, and presents the flowers to a flustered Donkey.

A later karaoke number was produced for the CD of Shrek. One scene features the two lovebirds performing a song-and-dance. While Donkey sings a rendition of Baby Got Back, Dragon provocatively shakes her butt at the camera, eventually knocking her boyfriend off his feet with her swaying tail.

This short film was produced as the audio-visual media of a Universal Studios ride, but it was subsequently released as an additional featurette along with the original Shrek film. Dragon has a prominent role in this production, first helping Shrek and Donkey to escape from an animated dragon statue magically brought to life by the ghost of Lord Farquaad, then later taking Shrek and Fiona on her back to their honeymoon hotel. Dragon's aerial maneuvers through a narrow file causes the pursuing stone dragon to break its wings off, effectively terminating the chase. Dragon saves them again as they plunge over a waterfall, and ultimately incinerates Farquaad's ghost with her fiery breath, finally finishing the job she began when she swallowed him in the first Shrek film.

Dragon is only briefly mentioned by Donkey to be acting "all moody and stuff lately." She does not appear until the very end of the film (in an extra inter-credits scene), accompanied by her and Donkey’s hybrid children. Which revealed why was all moody.

Initially, Dragon was intended to have a more meaningful role in the original storyline. When Shrek and Donkey, were changed by Fairy Godmother's magic potion, Dragon transformed as well into a talking Pegasus, the perfect match to Donkey's transformation into a handsome stallion. She was meant to join the other fairytale creatures as they broke Shrek, Donkey, and Puss out of jail, but she was ultimately cut from the film. The reasoning was that she had too much to say, and it would have been too difficult to hide her pregnancy. The filmmakers stated, however, that Dragon did still transform, proving her to be Donkey's true love.

The "mutant children" are hybrids, with mostly donkey features but sporting dragon wings and tails. They can fly and breathe fire.

Dragon plays a more consistent role in this film. Her child-rearing responsibilities prevent her from accompanying Shrek and Donkey on their quest, choosing instead to stay behind with Fiona and the other princesses. When Fiona announces her pregnancy, Dragon is shown to be happy for her. Despite her size and ferocity, Dragon is captured relatively easily by Prince Charming and his allies during their attempt to take over the Kingdom of Far Far Away.

Once the Dronkeys are released, Dragon joins the battle to recapture the Kingdom, turning the tide by tipping over Rapunzel's model tower that crushes Prince Charming. Whether he survived or not is unkown. Her family can be seen during the credits sequence, visiting the swamp with the Dronkeys playing with Shrek and Fiona’s children.

Along with other characters, Dragon, Donkey, and the Dronkeys show up uninvited at Shrek's home, on Christmas Eve, where they create chaos with their antics. Dragon unintentionally destroys the ogres' supper when she breathes fire into the chimney to grow the flames in the fireplace, and she shakes the ground by dancing.

Later on, she playfully drops a pile of snow from a tree branch onto Donkey, though Donkey remains utterly clueless as to who dropped the snow on him.

At the film's beginning, Dragon flies the Shrek family and Donkey from their swamp to the Kingdom of Far Far Away to celebrate the Ogre Triplets’ first birthday. When they arrive, Dragon and Donkey share a brief kiss, and he tells her not to eat the valet.

Dragon reappears in Rumpel's palace when he releases her to devour Shrek and Fiona, now chained to the walls. No explanation is given for how Dragon was captured. Having never met Donkey or any of his friends, Dragon fails to recognize them.

Donkey and Puss save Shrek and Fiona by dropping part of a huge disco ball on the dragon’s head. This stuns her, but only temporarily. In desperation, Shrek encourages Donkey to "woo" his wife. Donkey desperately turns on the charm and even puckers up for a kiss, but Dragon's only response is to gobble him up instead. Before Donkey is swallowed, however, Puss stabs Dragon in the backside with his sword, causing her to bellow and spit out her prey. Humorously, Donkey misinterprets this predatory act as some form of “kiss,” and happily shouts out “I'll call you!” Dragon then continues to hunt Shrek and Fiona, but is quickly thwarted by them, and ends up muzzled and trussed up in chains.

At the end of the film, with the original universe restored, Dragon returns to her normal and more benign personality. The ensuing "I'm a Believer" scene even features Dragon playfully gobbling her husband as she had done in the alternate world, but instead of actually trying to eat him, this time she opens her mouth to reveal him completely unharmed and very happy.

Dragon and the Dronkeys were completely absent from this film. She is indirectly mentioned via the death of Lord Farquaad, whom she ate. Duloc is shown in ruins.

Dragon is a giant magenta-red female dragon, who is 100 feet (or 30 meters) long from snout to leg. She sports a pink belly, maroon spines, white spikes on her cheeks, webbed ears, bat-like wings, razor-sharp claws, and a long spade-tipped prehensile tail. She also has obvious feminine features such as lipstick and large eyelashes, to avoid any mistake in identifying her as a female dragon, since this is critical to the plot of the first movie. Whether these are natural markings or deliberately applied makeup is never revealed. In some of the original conceptual drawings, Dragon was even more obese and had a mop of disheveled hair. The original intention seems to have involved making her analogous to a lonely, overweight, and unattractive woman, which would have made her spontaneous romance with Donkey more convincing. Much of this was lost in her final design of a fat, but not grotesque, classic European Dragon. She communicates using both her body language and loud roars. She and Donkey share strong affections for each other, and she is also very protective of her Dronkey babies. Despite her love for Donkey, Dragon is still a dangerous and destructive carnivore at will, who has eaten many knights and Lord Farquaad, although the latter act was to protect Shrek and Fiona.

Dragon appears as a boss in Shrek the game.

She also appears in Shrek Smash and Crash Racing as Donkey's kart, Donkey having used the wand of the Fairy Godmother to make her smaller.

Dragon roars after throwing Shrek with her tail

Dragon traps Donkey on a pillar

Dragon lights a candle with her fire

Dragon has Donkey wrapped in her tail

Dragon trapped by her chandelier collar

Shrek flies out from the Keep

Dragon from "Shrek: The Essential Guide"

Dragon in the book "Shrek!" 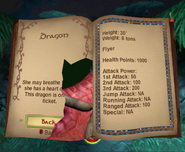 Very little is known about Dragon’s life prior to the first Shrek, other than that she guarded Fiona for many years and devoured many unsuccessful knights who had tried to rescue Fiona.

Dragon’s actual age is unknown, but she appears reasonably young for her species. The first film draws some similarities between her character and Shrek. Not unlike the protagonist, Dragon initially comes off as mean and selfish. Although not consciously withdrawn from the world, Dragon appears to harbour a lonely personality beneath her hard surface, evidenced by her strong desire to reach out to Donkey. One should note that her hoard is never seen again during the series, suggesting that she has found something she values more than riches.

As with the other most popular Shrek characters, a wide variety of "Dragon" toys and collectibles were created in conjunction with the various films. The first Shrek film had a large range of action figures, including a highly detailed and now fairly rare figure of Dragon. A battery-operated flying version of Dragon in the same approximate scale "flew" in circles when attached to a ceiling. Shrek 2 introduced a Dragon toy that fired a spring loaded fireball out of her mouth and came with a much smaller Dronkey that touted an actual "smokey" smell. In addition, there have been a wide variety of plush toys in various scales as well as McDonald's "Happy Meal" toys. Dragon also appeared in a television commercial, where she sets fire to a studio office after she overhears comments alluding to how big she is, displaying anger as one would expect of a human woman who is told she is too fat. She is also seen in Shrek-inspired video games.