Dulcinea is one of the main characters in the Netflix exclusive TV Show The Adventures of Puss in Boots.

Dulcinea is smart and independent, and when she decides she's going to do something rabid mules couldn't stop her. She is also quite naïve, almost bullheadedly so nothing will sway her from her rosy view of the world. Dulcinea only sees the best in people and often her relentlessly positive opinion brings out the best in them. 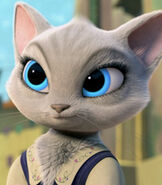