View source
The Duloc Knights are fifteen knights who serve Lord Farquaad and appear in Shrek.

Lord Farquaad orders his Captain to round up his finest knights to participate in a tournament. The knights gather in the Duloc arena filled with spectators where they are addressed by Farquaad. He announces that the champion of the tournament will earn the "privilege", not "honor", of rescuing Princess Fiona for him from a dragon-guarded castle. He adds that if they should fail, the next knight will be sent to take their place, and that some of them may die, but its a sacrifice he's willing to make. When Shrek and Donkey arrive in Duloc seeking Farquaad, they happen to interrupt the tournament. Farquaad, disgusted at the sight of an ogre, and declares that the knight who kills Shrek will be named champion.

The knights surround Shrek with their weapons drawn and back him up against a giant barrel of beer. Shrek gulps down a tankard of beer and then smashes the keg with it, causing beer to shoot out. The force of the beer knocks down the knights and turns the ground into a slush of mud. Donkey climbs onto another giant barrel and uses it to roll over several of the knights. Shrek easily beats the knights with various wrestling moves and wins over the crowd's favor as well. Farquaad watches on with shock and annoyance at the ease with which Shrek bests his finest knights. After the fight, all fifteen knights are left laying unconscious in the arena, making Shrek the tournament's champion. The knights' fate after the tournament is unknown, but they've entered the medic after their defeat of the tournament.

Knocked over by ale

Collage of the fight

Aftermath of the fight 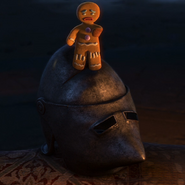 Gingy on a knight's helmet