Princess Fiona is one of the main characters in the Shrek franchise and the main female lead. She is the wife of Shrek, the daughter of King Harold and Queen Lillian, and the mother of the Ogre triplets.

Fiona was born in the kingdom of Far Far Away as the only child of king Harold and queen Lillian. At some point in her early years, she was secretly betrothed to Prince Charming by her father as repayment to the Fairy Godmother for turning him human. This marriage would never take place however.

Fiona was under a curse (possibly cast by the fairy godmother) that between sunrise and sunset she was a human, and at twilight an ogre and because of that her father was very strict with her and not letting her go to a sleepover to her best friend Sleeping Beauty became it took place after sunset

Fairy Godmother suggested to lock her away in a tower. There was a semi-complex plan where Prince Charming, was supposed to rescue Fiona and marry her. It was the King's way of repaying the Fairy Godmother for a favor she had done him while courting Fiona's mother (King Harold was originally a frog and the Fairy Grandmother allowed him to pursue his dream of marrying and loving Lillian, by making him human).

Fiona was imprisoned in a tower on Christmas Eve when she was 7 years old. She spent at least 20 years in that tower until Shrek rescued her she claimed to have

after Lord Farquaad banished all the fairy tale people from the kingdom which forces them to Shrek's swamp. Shrek was upset about it and went to Farquaad to get his swamp back. Farquaad orders a mission for Shrek to retrieve Fiona, so she can be his bride.

When she first appears, Fiona is angered to learn that her rescuer is not her Prince Charming, but an ogre, and that the man who wants to marry her wouldn't come himself. At first, she refuses to travel to Farquaad, but sooner or later, she befriends Donkey and develops a bond with Shrek, since they both realize they're more similar than they first thought, and Fiona begins to doubt that Farquaad is her true love. Her Dragon guardian later falls in love with Donkey. Through the course of the film, it's been revealed that she is cursed and while she is a human by day, she becomes an ogress at sunset and reverts to human at sunrise. The spell was placed upon her when she was a child by a Witch (It is unknown whether the Fairy Godmother placed this curse as part of her plan).

Donkey discovers this when checking on the Princess at night, and Fiona explains the curse. Shrek overhears part of this- with Fiona asking "who could ever love a beast so hideous and ugly?"-, and believes Fiona is referring to him. Angry and upset, Shrek hands Fiona over to Farquaad, and Fiona goes with him willingly as she is upset by Shrek's cold behavior, although she doesn't seem to like Farquaad on sight. When Donkey later on reveals to Shrek that Fiona was talking about 'somebody else', Shrek rushes off to disrupt the wedding. The curse is lifted at the end, when Fiona is kissed by Shrek and becomes a real ogre; while she had expected to become her human self, Shrek assures her that she is still beautiful and the two marry.

Fiona tries to convince Shrek to meet her parents in the kingdom of Far Far Away (a kingdom resembling Hollywood). They go, and her Fairy Godmother, who had her locked away in the tower to begin with, still believes she is under the original curse. When the Fairy Godmother finds out that she is in fact married to an ogre, Fairy Godmother plots to kill Fiona's husband so her son, Prince Charming, can marry her. It turns out that there was a semi-complex plan where the Prince Charming, not Shrek, was supposed to rescue Fiona and marry her. It was the King's way of repaying the Fairy Godmother for a favor she had done him while courting Fiona's mother. Fiona is briefly returned to human form after Shrek drinks a "Happily Ever After" potion, which changes both the drinker and their true love into more beautiful forms. To make the change permanent however, she must kiss her true love by midnight. Fairy Godmother tries to get King Harold to give his daughter a love potion so that she'd fall in love with Charming and kiss him to make the potion's effect permanent. Both plans ultimately fail however. Harold, after seeing how much Fiona dislikes Charming, does not give her the love potion. When Shrek tries to kiss Fiona, she tells him that she wants to live happily ever after with the ogre she married. She and Shrek then turn back into ogres, and Donkey (who had turned into a white stallion) turns back into a donkey, after which he cried himself to sleep, missing his long, sleek, mane of stallion hair.

Fiona has to act as the queen of Far Far Away while her father is ill. After a long hard day, Fiona starts to suggest to Shrek that they start a family. Shrek dismisses it at first, saying she is his family. When her father passes away, Shrek sets out to find her cousin Arthur Pendragon, and as he is leaving she tells Shrek that she is pregnant (something that she has been hinting since the start of the film). While she is having a baby shower, Prince Charming stages an invasion so that he can proclaim himself king of Far Far Away. Fiona organizes the resistance with her friends Cinderella, Snow White, Sleeping Beauty, Rapunzel and Doris the Ugly Stepsister, but Rapunzel betrays them to marry Prince Charming. Thanks to the fighting abilities of her mother, they get out of prison and manage to escape, and the other princesses 'cut loose' and become more independent, Artie ends up making a speech to convince the villains to go straight. In the end, she returns to the swamp and gives birth to ogre triplets with Shrek. This was the only film in the series so far where Fiona is not seen as a human.

Shrek makes a deal with Rumpelstiltskin to become "Ogre for a Day", and gives up the day of his own birth. Since Shrek was never born, he never rescued Fiona from the tower, her parents signed the contract, and Rumpelstiltskin became king of Far Far Away. After Shrek escapes from the castle, it is revealed that Fiona rescued herself from the tower and is now the leader of the ogre rebellion. Her personality is very abrasive and she refuses to believe in love, completely unlike her alternate self. Throughout the night of Shrek's day, Shrek attempts to woo this new Fiona, and fails multiple times. Close to midnight that night, the ogres storm Rumpelstiltskin's castle and capture him; just as they are preparing to eat him, dawn comes and Shrek begins to disappear in his former wife's arms, telling Fiona of their family and of her daughter, Felicia. She kisses him just as he's fading, and the curse is lifted. This is the only film in which we see Fiona with her hair down.

Once the time stream is back to normal, Fiona is shown at the birthday party with the children.

Fiona appears in all of the Shrek games.

She also appears in Shrek Super Slam as one of the 10 starters. Her Super Slam is that she sings very hard (so hard that birds can explode).

Fiona also appeared in Shrek Smash and Crash Racing. She is one of the four racers that are unlocked from the start. Fiona doesn't appear in her human form in this game at all. Her kart is the Onion Carriage that Shrek and herself used to travel to Far Far Away in Shrek 2. Fiona's special item is a pot.

Songs (in the musical)

(see lyrics to "Song:I Think I Got You Beat" from Shrek the Musical.)

Solos (in a duet)

Solos (in a group number)

Fiona is initially portrayed as the archetypal princess from fairy tales, speaking formally in matters of courtship and presenting high expectations of how she is to be rescued, who is to rescue her, and so forth. Later, Princess Fiona's true self emerges, as she is really a very down-to-earth and independent woman who is a match for or even better than Shrek when it comes to the bad habits he has. She is a loyal friend, and unlike princesses of fairy tales, an expert in hand-to-hand combat with knowledge of Japanese martial arts, leading a rebellion with the princesses while pregnant with Shrek's children. She also has very bad manners (just like Shrek), since she is an ogre. According to Magic Mirror, she likes Pina coladas and getting caught in the rain. She's shown to be very nurturing and proves to be a great mother to her and Shrek's triplets.

In the alternative world it is shown that she doesn't want to be a human and she wants to stay ogre.

On first meeting Shrek when he arrives to rescue her:

Fiona: What are you doing? You know, you should sweep me off my feet out yonder window and down a rope onto your valiant steed.
Shrek: You've had a lot of time to plan this, haven't you?
Fiona: You didn't slay the dragon?!
Explaining her curse to Donkey:
Fiona: By night one way by day another. this shall be the norm......Until you find true's first kiss. Then... take love's true form.....
After fighting with Shrek after the dinner with her parents:
Fiona: I've made changes for you, Shrek. think about that.
just before midnight strikes:
Fiona: I want what any princess wants - to live happily ever after... with the *ogre* I married.
After forcefully kissing Shrek causing no affect to the Rumpel's curse:

Shrek: This doesn't make any sense! True love's kiss was supposed to fix everything!
Fiona: Yeah. You know what? That's what they told me too. True love didn't get me out of that tower. I did! I saved myself! Don't you get it? It's all just a big fairy tale!
Shrek: Fiona, don't say that! It does exist!
Fiona: Then how would you know? Did you grow up locked away in a dragon's keep? Did you live all alone in a miserable tower? Did you cry yourself to sleep every night waiting for a true love that never came?!
Shrek: But… but... I'm your true love.
Fiona: Then where were you when I needed you? [She turns around and leaves]

Fiona excited when a knight (Shrek) is coming to the rescue.

Fiona as a zombie in Thriller Night.

Fiona as a warrior leader

Running to the castle

Once it was a beautiful baldahhin...

Fiona during her father's funeral 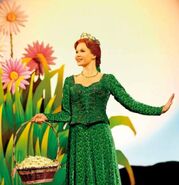 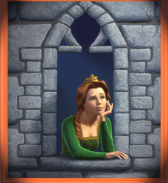 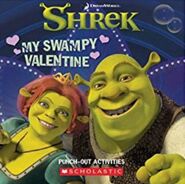 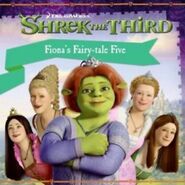 Fiona's character bio in Shrek 2 (video game) with all upgrades equipped.
Add a photo to this gallery

See more discussions >
Retrieved from WikiShrek (shrek.wikia.com), the wiki all about Shrek.
Community content is available under CC-BY-SA unless otherwise noted.