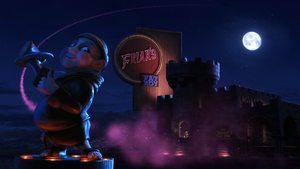 Friar's Fat Boy is a fast food restaurant in Far Far Away. It is themed after the legend Friar Tuck, who had also appeared in the first Shrek.

The Fairy Godmother and Prince Charming are served here by an employee named Priscilla in Shrek 2 when they take King Harold for a ride in the carriage.

The Fairy Godmother is seen to order two Renaissance Wraps, no mayo, and chili rings, while also offering King Harold curly fries, or a sourdough soft taco, both of which he refuses. Prince Charming requests a Medieval Meal, which comes with a paper king's crown and a free battle ax.