The Gingerbread Man (also known as Gingy) is a gingerbread cookie that was baked by the Muffin Man. He is a supporting character in the Shrek series.

Gingy is a Brownish Gingerbread man with White eyes, hands, and waist, he has light blue eyebrows, a red mouth and Purple Gumdrop Buttons (which is his favourite part of him).

Gingy was created by the Muffin Man, along with the rest of the Gingerbread people. Some years later, he attended Cookie Academy in Home Economics.

Sometime later, he got married to a red-head gingerbread woman, but the relationship did not last.

Gingy is first seen being interrogated about the whereabouts of other fairytale creatures in Lord Farquaad's dungeon. Farquaad has ordered his henchman Thelonious to torture Gingy by: Ripping off his legs, and dunking him in a glass of milk. Farquaad also taunts him by making his legs run around while saying, "Run, run, run, as fast as you can! You can't catch me, I'm the Gingerbread Man!", and then throws one of his legs at him and crumbles his other leg to pieces in front of him. Gingy resists and spits in Farquaad's eyes, causing him to threaten to take off one of Gingy's gumdrop buttons. This gets Gingy to start talking about the Muffin Man rhyme (Fooling Farquaad for the moment). However, the interrogation is interrupted by Farquaad's captain, who informs Farquaad that they have found the Magic Mirror. When the Magic Mirror awakens, Gingy yells at him to not say give up any fairytale locations, and he is quickly thrown into a trash can by Farquaad.

At Shrek and Fiona's wedding, Gingy is seen attending with one of his legs attached back with white glaze and walking with a candy cane.

Gingy finally gets his other leg replaced. While Shrek, Princess Fiona, and Donkey go to Far Far Away, Gingy and the other fairy tale creatures watch over the swamp.

He isn't seen again until later on when he sees Shrek, Donkey, and Puss in Boots getting arrested. The group then goes to the prison and helps the trio escape. Afterwards, Shrek and Gingerbread Man go to the Muffin Man's house and make a giant gingerbread man named Mongo. Using Mongo, Shrek breaks into the castle. Mongo holds open the door but his arms become severed due to multiple hot milk attacks. Mongo's gingerbread body is not durable enough to tank two head on waves of the hot liquid (this is a questionable feat as his body should be able to survive this attack-only a minute earlier he survived a fire ball to the upper gum drop button). The arms stay in position however long enough for Shrek to get into the castle. But Mongo remains in the moat, after he has hot milk poured onto him by the guards. The hot milk smooths out his arms so they break off. Gingy (the regular sized gingerbread man) was grieved and almost got stuck in the moat himself but got lifted off Mongo by Puss, leaving Mongo to slowly drown in the moat.

The Gingerbread Man also helps Shrek defeat the Fairy Godmother at the end of the film.

Gingy gave a present to Fiona, where he and Pinocchio give her a baby carrier.

When Prince Charming and Captain Hook broke in, they demanded to know where Shrek was. Gingy refused to tell, and when confronted by Hook, his life flashed before his own eyes. He was placed in a deserted bakery, but was rescued by Donkey and Puss in Boots.

Gingy was also at the big rescue seen in the end, where he slid down Rapunzel's hair, revealing that it was really a wig.

Gingy reveals that he's afraid of Santa Claus because he ate his girlfriend Suzy; though no one believes him.

At the climax, when Shrek and the gang go outside and see Santa riding in his sleigh, Gingy runs back inside screaming.

When Shrek enters the alternate reality, Gingy is seen fighting animal crackers as a gladiator, using a lollipop as a weapon.

Later, he is seen approaching Shrek, offering information on Rumpelstiltskin. Unfortunately, a fat and lazy Puss eats him before he's able to convey any information to Shrek. However, when Shrek returns to the real world at the end, the real Gingy is still alive and well.

In a deleted scene, Gingy fights alongside Pinocchio, The Big Bad Wolf , The Three Little Pigs and The Three Blind Mice against Shrek. He also uses his Animal Crackers to attack Shrek.

Gingy tags along with Shrek and the gang to tell scary stories at an abandoned Duloc. He recalls his experience in a rather deadly relationship in the story, "The Bride of Gingy". Starting by telling the Muffin Man how his latest girlfriend kicked him out, leading to force the creation of a woman who would "love him forever". He gets his wish, and his new girlfriend Sugar is created. Realizing her clingy nature, causing his personal life to come to a halt, he tries to run from her. This backfires as Sugar tries to convince him to come back, only to fall in the cookie dough to her death (supposedly). Little to Gingy's knowledge, the baking machine caused zombie versions of Sugar to break in his home and eat him. Scaring the three pigs and boring the Big Bad Wolf, he is called out for still being alive despite the story's ending. He then leaves out of embarrassment, claiming to see Farquaad's ghost.

His only appearance in the series was "Gingerbread Man vs. Humpty Dumpty". Shrek and Donkey debate on who'd win in a fight, with Shrek ending with a dark joke about how his stomach would be the winner.

Gingy is one of the playable characters in Shrek 2 (video game). He is playable in "Shrek's Swamp", "Ogre Killer", "Walking The Path", "Jack and Jill's Farm", "Prison Break", "The Mines" and "Cookie, Cookie". His special ability allows him to throw sweet-smelling cookies which have the ability to distract enemies and animals.

Gingy appeared in Shrek Super Slam as one of the 10 starting characters. His Super Slam has him spin around while throwing candy.

He also appeared in Shrek Smash and Crash Racing as one of the four racers that are unlocked from the start. Gingy's kart is the Cupcake Horse that Donkey created from a picnic basket with the Fairy Godmother's magic wand. Gingy's personal item is a candy cane. 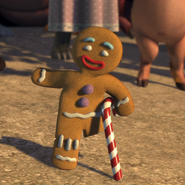 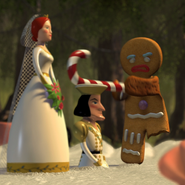 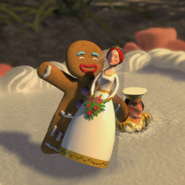 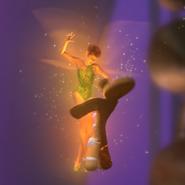 Gingy riding in his car

A Gingy toy for Shrek the Third from McDonald's

Gingy, as he appears in Shrek the Musical 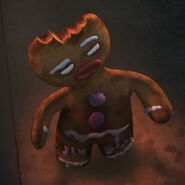 Gingy, as he appears as a zombie in Thriller Night