King of Far Far Away (formerly)

King Harold is the former King of Far Far Away, although he was not born into the true royal family. He was the husband of Queen Lillian and maintained the title of King through his marriage with her. He was not born human, but actually as a frog, and became a human due to the Fairy Godmother's magic, however, when she died, so did her spells.

Harold was never actually a human, he was a frog who lived in a pond. One day, he met up with the Fairy Godmother, who allowed him to pursue his dream of marrying and loving Princess Lillian, by making him human. Their first date was in the night and their first kiss made him human. After the death of Lillian's father, he became the king. His true identity was never discovered until his last months on the throne as ruler. Even when his true identity was discovered he was still loved by his people and family, greatly.

At some point Fiona was born Everyone was happy until they learned every time the sun went down They later told The Fairy Godmother how told her to lock the princess in the tower into to wait till Prince Charming would come to kiss her and be free from that curse Rumpelstiltskin was close into getting King Harold to sign a Magical Contract in order to supposedly remove Fiona's curse, however, just as the king and queen were about to sign it, he was told that Fiona was rescued.

At the beginning of the film, Harold doesn't like Shrek at all and is against the idea of Fiona marrying him, so he starts acting very antagonistic towards Shrek. He and Shrek argue at the dining table during a feast to celebrate the return of Fiona thus, destroying the feast.

He hears Shrek and Fiona having an argument, and blames Shrek for everything, even though he was being cruel to Shrek. Then, he was taken in the Fairy Godmother's carriage where she told him that he must have Shrek killed so her son Prince Charming can marry Fiona and become the king.

Later on, Harold reluctantly goes to the Poison Apple and hires Puss in Boots to assassinate Shrek, but this fails as Puss becomes quite fond of Shrek for not killing him despite the fact that he tried to kill Shrek and becomes Shrek's second sidekick.

When Fiona asks where Shrek is, Harold (unaware his plan backfired) tells Fiona that Shrek has ruined her and tells her he's thinking of what's best for her. Later that night, Fiona tells him she had been thinking about what he said and decided to "set things right" which Harold took to mean she was going to leave Shrek. Fiona reveals that in fact she is going to leave her parents and return home with Shrek. That night, after Shrek and Donkey drink a magic potion, Fiona faints (because of the potion) just as she is about to leave and changes back into a human.

Harold was happy that his daughter is human again and that she is with Prince Charming. He begins to feel extremely guilty when he sees how unhappy Fiona is. Harold was ordered by the Fairy Godmother to put a magical love potion into Fiona's tea so she can kiss Charming and love him. Harold spikes a cup of tea with the love potion and goes to give it to Fiona. After a brief conversation with her, Harold sees that Fiona is in fact genuinely in love with Shrek and he decides at the last minute not to give her the potion, knowing it will cost him greatly. The Fairy Godmother tried to cast a spell on Shrek (which most likely causes a human being to reverse with the initial form, as Shrek is a human at the time or possibly to kill him), but Harold dives in front of Shrek, saving Shrek, turning Harold back into a frog. He then apologizes to Shrek and Fiona for his past behavior and gives them his blessing.

King Harold sadly dies of sickness so Shrek becomes the new king of Far Far Away. Then the King was dying and so he called Queen Lillian, Shrek, Fiona, Donkey, and Puss to his room. The King almost died twice, but he was told that if Shrek doesn't want to be king, then he must find his nephew Arthur Pendragon. King Harold then passes away and is buried in a foot locker box. He was then sent away in the pond.

During the Ogre Triplets' party (the end-credits scenes), King Harold appears shown in a self-portrait (in the picture, he makes various expressions including a smile); proving he still remains, this time as a spirit. He makes a jealous glance when he sees Lillian dancing and flirting with an ogre.

On the Scared Shrekless DVD in 2011, it features a music video done by the entire cast of all four films doing Micheal Jackson's Thriller, entitled "Thriller Night'. The music video stars all the heroes living and deceased as Mongo, but not including Artie.

King Harold was best described as stubborn and unwilling to change. Despite this, he loved his daughter very much and wanted the best for her.

At first, he highly opposed the marriage of Shrek and his daughter Princess Fiona. He even went as far as employing an assassin (Puss in Boots) to murder Shrek after the Fairy Godmother ordered him to do so, to allow the handsome Prince Charming to take throne next to Fiona. This was most likely done because Harold really believed that Shrek had ruined Fiona's life and that she would have been better off with Prince Charming. Eventually, Harold apologized to Shrek, stopped the Fairy Godmother from hurting Shrek, and gave both Shrek and Fiona his blessing at the ending of Shrek 2.

Before he died, he apologized to Fiona for locking her in that tower years ago and confessed that her and Shrek’s eternal love for each other taught him so much. He even proudly called Shrek his son, to which Shrek replied that he was proud to call Harold his father.

It seems that Harold also felt scared of Fiona finding out that was a frog, since Shrek being an ogre most likely reminded him of his original form and gave the ogre grief because of it (as Donkey points out). When his true form was revealed, he felt ashamed of his daughter finding out who he really was and believed he wasn’t worthy of Lillian anymore. Lillian, however, reassured her love for him because of how much he was willing to give of himself to make Fiona happy.

Harold getting zapped by the Fairy Godmother while protecting Shrek

King Harold as a zombie from Thriller Night

Harold and Lillian before Fiona's birth 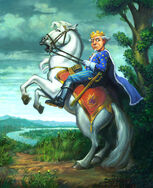