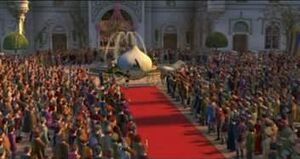 Humans (Homo sapiens sapiens) are a common species in the Shrek universe. They evolved from Homo erectus erectus and they used to be Homo habilis habilis before. Most of them are identical to human stereotypes in the "real" world. Their lands are ruled by Monarchs (Kings and Queens). These monarchies are divided into fiefs, such as Duloc, a lordship which was ruled by Lord Farquaad. They sometimes do not accept other species, especially ogres and generally believe themselves to be above fairy tale creatures (example: Farquaad).

Humans lifespan is approximately 80 years long. A human will generally become mature at the age of around 20 years old. Humans mate for life with two genders marrying and living together. Humans are mammals and therefore sexually reproduce.

Humans are quite violent by nature and therefore each kingdom and fief holds a standing army in case of war. Human armies are divided into two groups, Knights, and peasant soldiers. Knights are held in higher regard than peasants and will often lead their lessers into battle. Knights can also win the honor of carrying out quests for either themselves or their respective lord.