Humpty Alexander Dumpty, better known as simply Humpty Dumpty, is the tritagonist as well as the central antagonist of Puss in Boots. He is Puss in Boots' adoptive brother and former arch-nemesis.

In the film, Humpty first appears in the underground bar, revealing that he had hired Kitty Softpaws to bring Puss to him. He had located the magic beans that he and Puss spent their childhood searching for. However, Puss refuses, saying that Humpty is a traitor (which the egg denies) and leaves.

Later on, Puss tells Kitty that Humpty was his only friend at the orphanage that they both grew up in and not his brother. However, as they grew up, the harmless pranks they performed as children soon turned into crimes. This changes when Puss stops a bull from killing the head soldier's elderly mother. Puss, the new town hero, had less time to spend with Humpty, leaving him desperate, he attempts to steal without Puss, landing him in jail, until Puss bails him out and tells him he is not stealing anymore. In his desperation, he wakes up Puss one night, telling him he owes Little Boy Blue (the orphanage bully and the reason they became best friends) and his gang money, so asks Puss to help him leave town. When Puss gets him over what he believes to be the town wall, he realizes in horror that the "town wall" was actually the wall around the town bank, which Humpty had just robbed. Humpty escapes with all the money in the bank as the alarm goes off. The police arrive immediately, and, seeing Puss with Humpty, believes he helped in the crime.

Wrongly accused, Puss flees with Humpty in their cart, which is destroyed on the bridge, and all the money in the town falls in the river. In his desperation and depression, Puss jumps in the water. This event is what leads to the frosty relationship between Puss and Humpty. Later, seduced by Kitty, Puss agrees to go with them on their journey. Eventually, they steal the magic beans from Jack and Jill, an act which nearly costs them their lives. Soon after, they reach the only soil in which the magic beans can grow. In the clouds, they sneak into the long-dead giant's castle, steal the golden goose, and escape. After they celebrate and go to sleep, Jack and Jill come and knock Puss out. When he wakes up, he follows their trail to his hometown, where he is shocked to find Humpty handing out golden eggs to the residents. Humpty explains that it was all as part of his master plan to get revenge, and that everyone, the bar patrons, Jack and Jill, even Kitty, worked for him. He then has Puss arrested. While Puss is in jail, Puss learns that the Great Terror, the monster they encountered in the castle, will come and destroy the town in order to retrieve the Golden Goose (which was Humpty's plan all along), as the Great Terror is a giant goose who is the mother, and the Golden Goose is its baby. Puss, however, convinces Humpty against it.

However, it is too late. As the Great Terror descends on the town, Humpty helps lead it to the bridge, where he sacrifices himself so Puss can give the mother the golden goose. As the mother is about to leave, Puss sees where Humpty landed in the canyon, where he sacrificed himself, a golden egg surrounded by eggshell. The mother takes the egg back with her, and Puss says to himself, "I always knew you were good inside." Though, during the end credits, Humpty is seen in his normal form, dancing on the mother's back with the golden goose.

Humpty's grave can be seen. This is likely due to everyone believing Humpty was destroyed, either when he fell into the cloud at the end of the film or when he fell off the bridge-- although it could be an entirely different egg with the same name.

Humpty Dumpty has been a subject in several episodes. He was paired with Goldilocks in "Celebrity Fairytale Couples", and was thrown in a speculative fight against the Gingerbread Man. His last appearance was when his likeness was fused with Fairy Godmother in "Freaky Fairytale mashup".

In Shrek: Reekin' Havoc, Humpty Dumpty appears as one of the bosses.

Humpty Dumpty appears as a secret character in Shrek Super Slam. He is the only secret character who has an alternate outfit. Humpty's Super Slam has him spinning around on his head around the stage. He makes two appearances in story mode, the first of which he confronts Princess Fiona in her human form, and the second he is seen together with Gingy and Captain Hook dueling with Donkey, thinking he was the secret ingredient.

As a plush toy.

it ain't over easy!

Humpty Dumpty on the Puss in Boots Poster 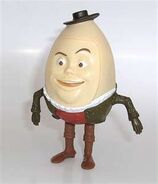 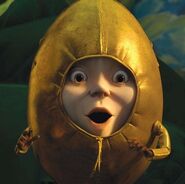 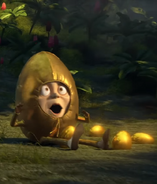 Humpty Dumpty runs into a heavy golden egg, hitting himself in the crotch.

Humpty after he fell
Community content is available under CC-BY-SA unless otherwise noted.
Advertisement