King consort of Far Far Away

Half-frog (during meeting with Lillian; possibly)

King Harold was the King of Far Far Away, although he was not born into the true royal family. He is the husband of Queen Lillian and maintained the title of King through his marriage with her. His first appearance took place during Shrek 2.

Prince Harold was born as a frog and lived in the kingdom Of Far Far Away. He sought the help of Fairy Godmother, who gave him a magical potion that made him human so that he could court Princess Lillian. Their first date was by a lily pond and their first kiss permanently made him human. He married Lillian, and after the death of Lillian’s father they became king and queen of Far Far Away During his early years as King, he fought in a number of battles and was wounded several times.

Fiona was born but she had a curse that made her a Ogre at night. So her parents told The Fairy Godmother, who told them to lock the princess in the tower, so she waited to have a kiss from her son Prince Charming to break the curse would come to kiss her and be free from that curse.

However, as the years passed, the King and Queen grew desperate and turned to Rumpelstiltskin who was close into getting King Harold to sign a Magical Contract in order to supposedly remove Fiona's curse in exchange of their kingdom, however, just as the king and queen were about to sign it, he was told that Fiona was rescued.

At the beginning of the film, Harold doesn't care for Shrek at all and is against the idea of Fiona marrying him, so he starts acting very unfriendly towards Shrek. He and Shrek quarrel at the dining table during a feast to celebrate the return of Fiona, thus eliminating the feast in the process.

He hears Shrek and Fiona having a fight, and accuses Shrek of everything, even though he was the one who started it and for making rude remarks about Shrek. Then, he was taken in the Fairy Godmother's carriage where she told him he must have Shrek slaughtered so her son Prince Charming can marry Fiona and become the king.

Later on, Harold reluctantly goes to the Poison Apple and hires Puss in Boots to murder Shrek, but this fails as Puss becomes quite fond of Shrek for not murdering him and becomes Shrek's second sidekick, despite the fact that he tried to kill him.

When Fiona asks where Shrek is, Harold (unmindful of his plan backfired) tells Fiona that he has ruined her and tells her he is thinking of what has been best for her. Later that night, Fiona tells him she was thinking about what he said and decided to "set things right" which Harold took to means as going to leave Shrek. Fiona reveals that she is going to leave her parents and return home with Shrek actually. That night, after Shrek and Donkey drink a magic potion, Fiona faints (because of the potion) just as she is about to depart and changes back into a human.

King Harold was content that his daughter is human again and that she has been with Prince Charming. However, he begins to feel extremely guilty when he sees how unsatisfied Fiona is. Harold was told by the Fairy Godmother to put a magical love potion into Fiona's tea so she can kiss Charming and love him. When Harold refuses to go along with the plan, the Fairy Godmother blackmails him, threatening to take his "Happily Ever After" away if he doesn't do what she tells him to, so Harold has no choice but to go with the plan. Harold spikes a cup of tea with the love potion and goes to give it to Fiona. After a brief discussion with her, Harold sees that Fiona is genuinely in love with the old Shrek and he decides at the last minute not to give her the potion actually, knowing it will cost him greatly and that Fiona is speaking from her own feelings, not because of a love potion. During the last battle, Charming kisses Fiona thinking she was taking the potion, but she is no different then she was before as she headbutts Charming and walks to her real husband. Then Fairy Godmother criticizes Harold for not giving Fiona the potion and he with a smirk tells her that he must have given her the wrong tea. Then Charming throws the wand back to Fairy Godmother and she uses it to shoot a powerful bolt at Shrek, presumably to murder him. Harold dives in front of him, deflecting the bolt towards Fairy Godmother, eliminating her for good and rescues Shrek, but he turns back into a frog in addition. Then he owes Shrek and Fiona an apology for his past behavior and gives them his blessing. Even after his true form as a frog is revealed, he was still loved by his family and people greatly.

King Harold becomes gravely ill and appoints Shrek to serve as king regent while he has been on medical leave. Nearing death, he calls in Queen Lillian, Shrek, Fiona, Donkey, and Puss to his room to say goodbye. He owes Fiona an apology for the mistakes he's made and tells Shrek he is proud to call him son. Harold also tells them they are next in line for the throne, though Shrek does not want to be king. Then Harold informs him of his nephew Arthur Pendragon, the only other remaining heir. Harold takes his last breath and passes away in bed.

King Harold appears in a couple of flashbacks, in the alternate universe, due to Shrek never being born and rescued Fiona, King Harold and Queen Lillian signed their contract to Rumpelstinkin, making the King and Queen to fade from existence, leaving only their crowns behind and their kingdom in Rumpelstinkin's hands, who leaves it fall into ruin.

During the Ogre Triplets' party (the end-credits scenes) at the swamp, King Harold reappears as a self-portrait (in which he makes various expressions including a smile); this proves that he still remains, this time as a spirit. He makes an envious glance when he sees Lillian dancing and flirting with an ogre right before returning his normal expression.

On the Scared Shrekless DVD in 2011, it features a music video done by the entire cast of all four films doing Micheal Jackson's Thriller, entitled "Thriller Night'. The music video stars all the heroes living and deceased as Mongo, but not including Artie.

King Harold was best described as stubborn and reluctant to change. Despite this, he loved his daughter dearly and wanted what was best for her.

At first, he highly opposed the marriage of Shrek and his daughter Princess Fiona. He even went as far as employing an assassin (Puss in Boots) to murder Shrek after the Fairy Godmother told him to do so, to allow the good-looking Prince Charming to take the throne next to Fiona. This was most likely done because Harold truly believed that Shrek was ruining Fiona's life and that she would have been better off with Prince Charming. Eventually, Harold owed Shrek an apology for being rude to him, stopped the Fairy Godmother from harming Shrek, and gave both Shrek and Fiona his blessing at the ending of Shrek 2.

Before he passed away, he owed Fiona an apology for locking her in the tower years ago and admitted that her and Shrek’s eternal love for one another taught him a lot. He even proudly called Shrek his son-in-law, to which Shrek replied that he was proud to call Harold his father-in-law.

It seems that Harold also felt frightened of Fiona finding out that he was a frog, since Shrek being an ogre most likely reminded him of his original form and gave the ogre grief because of it (as Donkey points out). When his true form was revealed, he felt guilty of his daughter finding out who he truly was and believed he wasn’t worthy of Lillian any longer. Lillian, however, reassured her love for him because of how much he was ready to give of himself to make Fiona satisfied. 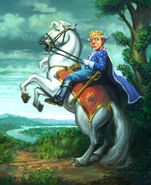