The Pied Piper is a minor character in Shrek and a minor antagonist in the parallel timeline in Shrek Forever After.

The Pied Piper appears briefly in the first film, among the fairy tale creatures exiled in Shrek's swamp, where he rallies many rats with his enchanted flute.

The Pied Piper is hired as a bounty hunter by Rumpelstiltskin to find and capture Shrek, when the latter escapes from his castle.

He has a magical flute with a dial on it; Whichever symbol he chooses, the creature represented will be forced to do nothing but dance against their will and follow him once he starts playing. The known things he can make dance are rats, witches, ogres, socks and humans since Fiona is half human and possibly dwarves, as at the end of the film he controls Rumpelstiltskin with his flute and he is a dwarf. His flute is also his primary way of communicating, as he is unable to (or chooses not to) speak. When Piper is first introduced, Rumpelstiltskin's witches show disbelief in his role as a bounty hunter, Rumpelstiltskin gives him a look, apparently telling him to troll the witches. He then changed the flute icon to Witches, when he starts playing Sure Shot on his flute and the witches body's are forced to dance. Later on, Piper tricks the ogres into thinking he is Fifi by hiding in a giant goose costume during the planned ambush. He soon has the ogre army, as well as Shrek and Fiona, under his control as he forces them to dance to Rumpelstilstkin's dungeon by playing Shake Your Groove Thing. Donkey and Puss in Boots come to Shrek and Fiona's aid, though, resulting in Piper subsequently being fired by Rumpel. Before he is fired though, he is told to pull Rumpel's socks up using his pipe.

The Pied Piper is then again seen in the ending credits tormenting Rumpelstiltskin by making him dance against his will who is now a captive of the ogres.

Piper's Past is a book that was made in 2007. It explains a lot about Piper and how the 'mix up' happened.

The Pied Piper's origins are elaborated further in the comic book prequel of Shrek Forever After. [1] In this story, his flute was stolen by the Rat King as revenge for having his rat army taken from him, leaving Piper helpless against the creatures until he could gain his flute back. Donkey finds the dejected Piper on his way back from a music store, and proceeds to show him the way there. After failing to find another instrument to match the powers of his flute, Piper and Donkey are approached by Rumpelstiltskin, who is a worker at the store. He makes a deal with Piper, saying if he would ever help him out in a future bind, he would help him gain his flute back and get rid of 'that annoying Donkey' in the process. With his flute returned to him, Piper commands the rat army to turn against their Rat King and is satisfied with being returned to his position of power.

The Pied Piper is also a boss in the Shrek 2 video game, where he commands his rats to attack you and he appers as a poster in Shrek 2 PC game he's on the tree. He appears as a boss again in the Shrek Forever After video game adaptation, using his magical flute to cause numerous obstacles for Shrek. He is also featured in the GameBoy Advance game, Shrek Reekin' Havoc.

In PC version, he is one of the Wanted Posters. 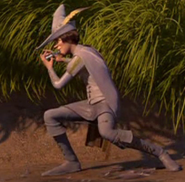 The Pied Piper in Shrek the Musical

Pied Piper as a zombie from Thriller Night.

Pied Piper from the wanted poster.