Charming Fortuna, aka Prince Charming, is the son of the Fairy Godmother in the Shrek franchise. He is voiced by Rupert Everett and appears in Shrek 2 and Shrek the Third.

Prince Charming was born to The Fairy Godmother and his unnamed and deceased father in the kingdom of Far Far Away. When he was a little boy he was betrothed to Princess Fiona, who was later cursed to turn into an ogre at night and locked away in a tower of a dragon-guarded castle. Charming was raised to believe that he would be the one to rescue Fiona and break her curse.

Although Charming doesn't appear physically in the film, he is mentioned when Fiona reveals that she thought that she would be rescued by Prince Charming, possibly having been told so by her parents.

In Shrek 2, he is more of a comic relief character. Charming's narration explains Fiona's childhood, and reveals that she was locked away at the advice of Fairy Godmother. Charming travels a long distance by horse to the Dragon's Keep to rescue Fiona. To his shock, he finds the Big Bad Wolf in her bed instead who tells him that Fiona has already been rescued and is on her honeymoon.

It is later revealed that Charming is, in fact, the son of the Fairy Godmother and that she wants her son to marry Fiona so that Charming can become king of Far Far Away (similar to Lord Farquaad's intentions from the first film). It can be reasoned that after having Fiona locked away it was always her plan to have Charming rescue her, Shrek being an unforeseen problem. In contrast to his fairytale namesake, this version of Prince Charming plays a more villainous role.

Later in the movie, after Shrek, Donkey and their new friend Puss-In-Boots steal Fairy Godmother's Happily Ever After potion and trash her factory, Charming enters, notices the mess and asks what happened, and she tells him Shrek was there. Charming then demands to know where Shrek is so he can kill him with a sword. However Fairy Godmother talks him out of it, stating he'll still be king.

Later, Charming deceives Fiona into believing that he is Shrek having been turned human by a "Happily Ever After" potion. Fiona remains highly suspicious of Charming as he acts nothing like Shrek, forcing Fairy Godmother to have Harold give Fiona a love potion that will make her fall in love with the first man she kisses.

At "Shrek" and Fiona's wedding ball, Charming pressures Fiona into dancing with him. At numerous points he attempts to seduce Fiona into kissing him, nearly succeeding until Shrek and Donkey interrupt the dance. In the ensuing confusion Charming forces a kiss on Fiona, believing that she has now fallen in love with him. However, Fiona headbutts him unconscious, and Harold reveals that he never gave Fiona the love potion. Charming wakes up to throw Fairy Godmother's wand back to her, and is later seen being forced to dance by Doris.

In Far Far Away Idol, Charming sang, "I'm Too Sexy", by Right Said Fred, although, during the song, Shrek and Fiona press a button, opening a trapdoor below him, due to his horrible singing.

Charming is first seen in a theater, playing himself due to his name. However, despite being the hero in his own play (which appears to be a spoof on the classic fairytale, Rapunzel), the audience cheers when the "Shrek" mascot comes onstage, along with Shrek's friends, who are there watching the show. Finally (in a version of a Buster Keaton gag), a prop tower falls on Charming, but he escapes injury as the window passes around him. Charming leaves the theater upset and goes to his "dressing room" (in reality, the back alley behind the bar) and starts sobbing at his misfortune. There, Charming vows to his mother (whom he has a picture of) that he will become the king of Far Far Away and kill Shrek to avenge her death.

Later, after seeing King Harold's funeral, Prince Charming goes to The Poison Apple and organizes an army of villains who don't trust him at first due to him being presented as a hero - Captain Hook, Stromboli, Headless Horseman, Evil Queen Evil Trees and Witches - all upset that they haven't gotten their "Happily Ever After" and encourages them to help him in his plans of revenge.

While Shrek, Donkey, and Puss are in search of the heir to the kingdom, Fiona's cousin Artie, Charming and his new friends attack the castle. When Charming sees Wolf, Gingy, Pinocchio, and The Three Little Pigs, he demands to know where Shrek is. They deny knowing anything, then Charming orders them to cooperate with him, because he will be the new king of Far Far Away. Gingy states the only thing he'll be king of is King of 'Stupid'. Then Captain Hook demands Gingy tell him where Shrek has gone, and Gingy goes into a dream. Charming then asks Pinocchio about Shrek's whereabouts, knowing he can't lie. So Pinocchio told Charming a twisted up version of the truth while trying not to tell the truth but trying not to lie at the same time, something that confused everyone. One pig couldn't take it any longer and told Charming that Shrek was out bringing back the new heir. Charming then orders Hook to kill the new heir and bring Shrek back alive so he can kill him himself.

Later Charming is seen again with his new girlfriend Rapunzel who brings Fiona and her princess friends to Charming who has them imprisoned.

After Shrek, Donkey and Puss return to Far Far Away with Artie (thanks to Merlin), Charming is seen getting ready for a show where he plans to kill Shrek in front of the whole kingdom, when Shrek confronts him in the dressing room and demands to know where Fiona is. He tells shrek they are safe then Charming then summons his soldiers to come capture Shrek, Donkey, Puss and Artie. Charming prepares to kill Arthur when Shrek tells him to spare Artie, stating that he is the one Harold wanted to be king first and Artie is just a pawn. Charming spares Artie but has Shrek restrained with chains and Donkey and Puss (who had switched bodies) imprisoned with Fiona.

Charming then begins the plan and soon places Shrek in the play, now being performed in an auditorium before the entire kingdom. After being brought on stage, Shrek begins to ruin it for Charming by insulting him, making everyone laugh. Charming attempts to make his play a success by extemporizing his lines. His attempt was clearly futile as Shrek simply mortifies him for his clothes and singing, making the audience laugh again, turning the whole show into a whammy for Charming. Enraged by this, Charming silences everyone and enunciates to Shrek his pain of being ostracized. Invigorated to deliver the kill, Charming raises his sword to slash Shrek onstage, but Fiona and the others burst in, getting ready to fight the villains. However, the villains overpower the heroes when suddenly Artie arrives and convinces the villains to give up their evil ways, and they do so.

However, Charming refuses to listen, and prepares to kill Artie, when suddenly Shrek breaks free of his chains and Charming stabs him instead, but (as Shrek reveals to the others) Shrek is completely unharmed; Charming (with his bad aim) merely stuck the sword between Shrek's arm and side. Shrek then picks up Charming and Charming says "This was supposed to be MY happily ever after!" and Shrek says "I guess you need to keep looking, because I'm not giving up mine!" and then tosses him before Dragon, who tips over the stone tower with her tail, which falls on Charming right after he says "Mommy?", crushing him. The crown then goes rolling and Artie puts his foot on it.

Charming doesn't appear in the fourth movie and he also makes a cameo during the flashback montage of the end credits but he was supposed to be dead in the third movie. However, it remains debatable whether or not he died since his fate is unclear as it isn't shown onscreen, although it is clear he didn’t rescue Fiona, possibly because she wasn’t a princess anymore due to her parents signing their kingdom away to Rumpelstilskin, and Charming knew that he wouldn’t become king by marrying her.

Charming appears in the story "Bates Motel", told by Puss and Donkey. He first appears as a warm and friendly motel owner, inviting the two in, but is told by Donkey to have killed the Puss. Puss then replies that Charming killed the Donkey. Puss and Donkey argue over who is killed, then resort to just making each other look bad, Puss saying that before Charming could kill him, the Puss leaped to safety. Donkey then replies that "was exactly what Charming wanted the Puss to do". Charming laughed, then pulled a lever to make Puss fall through a trapdoor. The story ends as Donkey gets Pinocchio to spray Puss with water, making him run away, which Shrek later says is cheating.

Charming appears in zombie form in the dance number and later is seen sitting between Thelonious and Cyclops in the audience of the movie theater when Shrek wakes up from his dream. This showed that he did survived the falling tower.

Charming also appeared in Shrek Super Slam as one of the 10 starting characters. His Super Slam is that he slams down with his sword creating giant beams of light.

He also appears in Shrek Smash and Crash Racing. Prince Charming is one of the eight unlockable racers in this game. Prince Charming's kart is the stallion that he uses in the Shrek films. His item is a giant mirror.

As seen when he narrates his story at the beginning of Shrek 2, he is portrayed as a selfish and arrogant mother's boy. He is also somewhat effeminate, which Shrek pokes fun of, calling him a pretty boy. He is sometimes not very intelligent, as seen where he pretends to be Shrek, he doesn't know that he needed to act like Shrek to order to deceive Fiona. He also was very offensive towards Shrek, as when he called him "dreadful". He also believed, as shown in his last moments, that the "Happily Ever After" of being with Fiona belonged to him, but that Shrek stole it from him. However, in Shrek The Third, he was eager to avenge his mother after her death in Shrek 2, caused by Harold. He, along with his mother, was remorseless, unlike Harold, who formerly conspired with them, as he had no qualms about how what they were doing would affect Shrek. He was also the only Shrek villain to never get along with Shrek, though his mother and his minor henchmen only pretended to, and the only one that Shrek never trusted. He also shares similarities with Lord Farquaad and Rumpelstiltskin, for the former, that they both wanted to marry Fiona to become king, for the latter, that their lives were inadvertently ruined by Shrek's rescuing of Fiona.

Charming riding his horse to the Dragon's Keep

Pulling back the curtains to Fiona's bed

Charming asking Fiona to dance at the ball

Charming in the Shrek 2 video game

Charming arriving at the Poison Apple in Shrek the Third

Charming on one of the witches' backs laughing evilly

Charming ordering his gang to attack Far Far Away

Charming asking Pinocchio where Shrek is

Charming facepalming himself when he is annoyed by Pinocchio

Charming flipping his hair during the play

Prince Charming as he appears in Shrek the Third 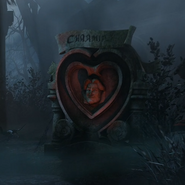 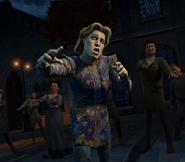 Prince Charming as a zombie in Thriller Night. 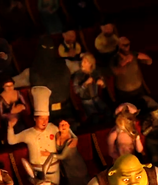 Prince Charming in the theater audience in Thriller Night.

An original iteration of Prince Charming from Shrek Extra Large