Princess Fiona's tower is the tallest tower of the Dragon's Keep. Princess Fiona was kept locked away in its highest room, waiting for her true love to slay her Dragon guardian and rescue her.

The tower rises well above the rest of the keep and can only be reached by venturing deeper into the castle. A short bridge from another part of the castle connects to the tower, leading to the spiral stairs that lead up to Fiona's chambers.

Fiona's room is sparse, containing only a bed, a dressing table and chair, tapestries depicting a knight rescuing a princess, a stand for a vase of flowers, and a chandelier (which Shrek breaks with his fall). The only ways of entering or exiting are a small window above Fiona's bed and a door barricaded from the outside to keep Fiona from escaping.

When Shrek and Donkey enter the Dragon's Keep, Shrek guesses that Fiona is kept in the tallest tower based on a storybook he read earlier. Just as Shrek arrives at Fiona's tower, Donkey accidentally awakens Dragon while wandering around the castle. Shrek ends up being launched into the air by Dragon's tail, conveniently crashing through the tower's roof and into Fiona's room. After waking up Shrek ignores Fiona's romantic expectations, yanking her out of bed and rushing to leave. Frustrated, Fiona tells Shrek that he's supposed to "sweep [her] off [her] feet out yonder window, down a rope onto [his] valiant steed". Instead, after breaking off the door knocker Shrek smashes through the door and leaves the tower with Fiona in tow. Much later when Fiona reveals her ogre form at her wedding to Lord Farquaad, he threatens to lock her back in the tower for the rest of her life.

In Shrek 2 it is revealed that Fiona's parents locked her away in the tower following the advice of Fairy Godmother, with the intention of having her son Prince Charming rescue her, marry her, and become king of Far Far Away. When Charming finally arrives to rescue Fiona however, he instead finds the Big Bad Wolf relaxing in her bed who informs him that Fiona is already rescued and married. While staying in Far Far Away, Shrek sneaks out of bed to read the diary Fiona kept as a little girl which reveals that some time after being cursed Fiona was told by her father that she would be "going away for a while", which she assumed meant that she would be attending a finishing school. Later she seemed happy about being sent to the tower, when her mother had told her that when she was old enough her Prince Charming would rescue her and return her back home.

It is revealed in Shrek: Forever After that Harold and Lillian feared that their daughter would never be freed from the tower and so they went to make a deal with Rumpelstiltskin. He promised them that if they signed his contract, he would break Fiona's curse in exchange for them handing over the kingdom of Far Far Away to him. They nearly signed this contract until a messenger interrupted with them with the news that Fiona had been rescued, and so they tore up Rumpelstiltskin's contract and left.

Shrek revisits the tower in the alternate reality to try to rescue Fiona again, but discovers her room to have been long since abandoned. Shrek finds only a wall of tally marks showing how many days Fiona spent in the tower, her tiara, and her "token of gratitude" that she gave him when he first met her. It is later revealed that because Shrek never came to rescue her, Fiona freed herself from the tower.

Shrek and Donkey's first look at the tower

Shrek is thrown at the tower by Dragon

Shrek wakes up from the crash

Fiona's wakes up to see her "prince charming"

Fiona in her bed

Shrek breaks down the door

Shrek and Fiona run down the stairs of the tower

Shrek and Fiona cross the bridge away from the tower

Fiona's tower in a storybook from Shrek 2

Charming makes his way to the tower

Fiona's drawing of the tower

Fiona's tower from a storybook

Fiona's room in the alternate reality

Fiona's tally of days spent in the tower

Fiona's Tower in Shrek the Musical.

The tower in early storyboards

Fiona's room in Shrek: Hassle at the Castle 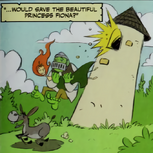