While Rapunzel doesn't physically appear, her star home is seen when Shrek and Fiona are going to the Far Far Away palace. In one of the pages Fiona’s diary, there is a drawing of the latter in a tower with Prince Charming climbing her hair, an allusion to the Rapunzel fairy-tale.

In Shrek The Third, Rapunzel is first seen with the other princesses attending King Harold’s funeral. She is later seen during Fiona's baby shower until Prince Charming invades the castle and the princesses and Queen Lillian escape secretly. Eventually, Rapunzel pretends to find an exit and runs all the way to where Charming really is. The princesses and the Queen follow, but they are cornered by Charming's knights. Rapunzel then reveals her true nature that she is actually on Charming schemes and his girlfriend and shows off her love and affection towards him and the ladies are imprisoned in a dungeon. While they are imprisoned, Rapunzel is practicing for her role in Prince Charming's play. In the final performance, she sings and acts as a princess on top of a tower (mimicking Princess Fiona, whose situation itself was a mimic of Rapunzel's) but the play was interrupted by all of Shrek's friends and wife. Gingy enters the stage by holding on to her hair as he quickly gets down. He accidentally pulls all of her hair and Rapunzel gasps in horror (when it is revealed that she is actually bald and her hair is just a wig). She later runs off the stage due to the embarrassment. When her tower fell down on Prince Charming, it is unknown if she survived or not.

Rapunzel was referenced in the episode "Celebrity Fairytale Couples", being paired with Lancelot where there couple name was "Rapunzelot".

Rapunzel is a very beautiful fair-skinned princess with very long blonde hair (which is later revealed to be a wig near the end of the movie) that has some of her hair tied up in a very high updo on top of her head which is wrapped with a thick braid which flows down from the very top, she wears a tiara on the lowest level of her updo. (she does not have any visible accessories, flowers or other decorations in her hair) and light green eyes.

Her initial outfit consists of a long golden dress with red stripes on the sleeves and skirt, a gold necklace with a flower pendant around her neck and red studded butterfly earrings.

For Charming’s performance, her outfit is fairly altered; she now wears a golden square-neck dress with orange swirled patterns and a small emblem of the castle on the bodice.

Initially, Rapunzel is quite reserved and meek but blatantly opinionated, as shown when she states that Fiona and Shrek need to work on their marriage after having children. After revealing herself to be on Charming's side, she's shown to be backstabbing, belligerent and greedy. She has little remorse about her actions and her overall selfishness leads to her defeat.

Nevertheless, she appears to have some standards. At Harold’s funeral, she genuinely seems upset about his passing (though this may be to conceal her ultimate alignment). She seems to have a sympathetic side and this is evidenced when she reminds Charming to not hurt Fiona, the princesses and Queen Lillian as he promised, though she doesn’t rebel any further as Charming silences her. Just before the princesses are led to their dungeon, she turns back and gave a sorrowful expression on her face. Despite this, her passivity and greed gets the better of her which prohibits her from redeeming.

She appears to resent Snow White, claiming that the latter being voted the fairest of the land was merely because of a rigged election, provoking the latter to sardonically mock her hair, foreshadowing her defeat.

It is shown that Charming is Rapunzel's boyfriend who both seem to be in love with each other as they are seen kissing and Charming also tells Fiona and her friends to say hello to the new queen of Far Far Away: Rapunzel. 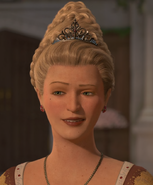 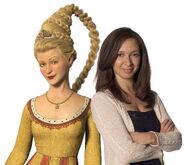