WikiShrek
Register
Don't have an account?
Sign In
Advertisement
in: Characters, Male, Shrek Forever After Characters,
and 17 more

His Carriage
Shrek's Swamp (as a prisoner, currently) Far Far Away

He is voiced by Walt Dohrn.

Rumpelstiltskin was born a Dwarf in the land of Far Far Away.

King Harold and Queen Lillian were going to sign their kingdom over to Rumpelstiltskin to break Fiona's curse, but the deal is cancelled when they learn that Fiona has been rescued from the tower by Shrek. Stiltskin's life deteriorated afterwards, and his reputation is practically ruined as he wishes vehemently that Shrek was never born.

After faking a carriage accident, Shrek stumbles upon Rumpelstiltskin, who in turn for the "help", offers the ogre eyeball-tinis and roast rat. During their meal, Shrek mentions that he has been depressed lately and wants just one day of being a "real ogre" again. Hearing this, Rumpel offers Shrek a deal of one day of being an ogre in exchange for one day of his childhood. So Shrek signed the contract without knowing that he just signed the day he was born away, and soon finds himself in a twisted, alternate universe in which Fiona was never rescued from the Dragon's keep by him and thus his children were never born. Far Far Away is now ruled by King Rumpelstiltskin, who has many witches under his command to do his dirty work.

After a meeting with his inner circle of witches, Rumpelstiltskin has Baba hire a bounty hunter to fight the ogre resistance and prevent Shrek from kissing Fiona which would destroy his alternate universe and his empire. The Pied Piper, a bounty hunter who can make anything dance with his flute, is hired and Rumpel sends him out with witch reinforcements to fight the ogre resistance led by Fiona. The Pied Piper succeeds in making them dance and he captures them all. However, Shrek and Fiona are rescued by Donkey and Puss.

As a last resort, Rumpel offers any deal (the "Deal of a Lifetime" as he calls it) to whomever turns Shrek in. Once Shrek hears of this, he turns himself in to get this deal, and in return, Shrek has Rumpel free all ogres, even though he keeps Fiona (as she is a princess by day, and therefore not "all ogre"). He tries to feed them to Dragon, whom has never met Shrek and is now antagonistic in nature, but Donkey, Puss, and the ogre resistance ambush the palace and start a battle with Rumpel and his witches.

They eventually defeat Rumpel as the dwarf tries to escape on his pet goose Fifi, but by this time, the 24 hours are up and Shrek is starting to disappear. Fiona, who now loves Shrek, kisses him before he vanishes completely. Thus, Rumpelstiltskin's world falls apart, and Rumpel falls into a yellow void and dies, and everything is restored back to normal. Rumple is last seen being held prisoner at the aftermath party before the credits, and Fiona kills Fifi by making him explode by singing a high note (similar to the bluebird scene in the first Shrek film). Rumpelstiltskin is also being tormented by the Pied Piper, being forced to dance in his cage.

In Donkey's Christmas Shrektacular, it is shown that Rumpelstiltskin is still imprisoned at the swamp, and most likely will remain there. In the virtual fireplace video Shrek's Yule Log, he tries to put out the fireplace twice, but is stopped by Shrek both times. In the actual video Donkey's Christmas Shrektacular, Rumpelstiltskin is shown re-imprisoned inside his cage, apparently having tried to run away once before, and gets coal in his stocking for Christmas.

On the DVD release of Scared Shrekless, it features a Shrek version of Michael Jackson's Thriller. This music video is performed by the whole cast of all four movies, including deceased classic villains Lord Farquaad, Fairy Godmother and presumed Prince Charming.

As King of Far Far Away in the alternate universe, Rumpel wears a white, pompous/regal outfit with a golden outline. He also wears a number of wigs, including a white powdered wig for formal and business occasions, a wig resembling his goose Fifi, and his "angry wig"; a messy, fiery red wig for when he's in a bad mood.

His name also seems to be hard for people to pronounce, as Pinocchio calls him "Grumpel Stinkypants".

Rumpelstiltskin is a snarky, stingy, sinister, pugnacious, and ungenerous man who will do whatever it takes to claim the throne of Far Far Away. However, even though he achieves this goal for a brief time in the alternate universe, he throws lavish parties for himself and his witch servants, while the outside world becomes an unrecognizable dystopia. He shows no care for anybody else's life, such as removing Shrek and his kids from existence. However. he cares deeply for his enormous goose Fifi.

Rumpelstiltskin has no magical powers as far as anybody has seen, but he does have a variety of magic contracts that he calls "magical transactions" (as shown in Shrek Forever After). These contracts seem to be able to warp dimension based on the details written within that had been agreed upon by Rumpelstiltskin and his recipients, to the point where they can actually create an alternate reality, as he demonstrated by tricking Shrek into signing a deal that allowed him to null away the day the ogre was born (subsequently allowing Rumpel to gain kingship over the Kingdom of Far Far Away).

However, these contracts are not perfect, since Donkey (in his alternate reality self) claimed that all of Rumpel's contracts have an "exit clause" that can render the contract void if the recipient succeeds in fulfilling the clause. Details of the "exit clause" can only be found on the contract once it has been rearranged via origami. 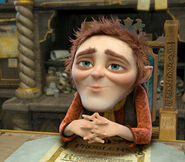 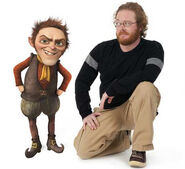 Rumpelstiltskin and Fifi as zombies in "Thriller Night"

A wanted poster for Rumpelstiltskin which appears in the Shrek 2 PC game
Community content is available under CC-BY-SA unless otherwise noted.
Advertisement