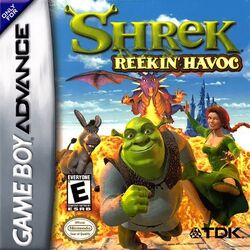 Shrek: Reekin' Havoc is a video game released in 2003. It is loosely based on the plot of the attraction/short film Shrek 4-D, where Lord Farquaad rises from the dead to get revenge on Shrek and Fiona.

The first level in the game, Fiona must protect a local village by saving Pinocchio from being possessed by Farquaad's ghost. Along the way, she rescues Mister Geppetto, the Fairy with Turquoise Hair, and a monkey.

After Fiona calms Pinocchio (and turning him into a real boy), she heads to the Fairy Woods where various wolves, bears and witches have taken over. Eventually, she goes face to face with the Big Bad Wolf (now possessed by Farquaad) and saves the Three Little Pigs.

Farquaad soon takes control over the Pied Piper and lure rats into the town to eat it. Fiona is once again tasked to save the townspeople by bringing the Piper out of possession. She also comes across and evil Humpty Dumpty that stands in her way. Of course, she defeats him, while also saving Gingy, Hansel, and Gretel.

Shrek hears word that Lord Farquaad's Ghost has been causing havoc in Beanstalk Town, where a bunch of magic beans are being planted. They grow beanstalks that lead to a sky-based utopia inhabited by giants. He climbs up a beanstalk that emerged in a nearby village and proceeds to infiltrate a Giant's castle. There he fights the Golden Goose and the Magic Harp, and rescues Jack and his family (mother and grandfather). Shrek soon fights the Giant, ultimately winning.

In Neverland, Lord Farquaad's Ghost tricks Peter Pan's shadow into believing he's the real Peter. Shrek sails to the Pirate Ship, where Captain Hook and the Pirates are holding the Darling children (Wendy, John, and Michael) hostage. He saves the two, beats up the pirates and returns the shadow to Peter Pan.

The Ghost of Lord Farquaad

Shrek is on his way to Duloc to confront Lord Farquaad's Ghost and bring peace to his land. However, he was unaware of a scheme Farquaad had planned, and fell into a trap. Now it's up to Fiona to save her husband and defeat the deadly spirit once and for all. She rescues both Monsieur Hood and Donkey, while discovering that Thelonius is the new king of Duloc. Fiona beats up Thelonius and eventually makes it to a graveyard where Lord Farquaad's grave resides. The Ghost of Lord Farquaad is finally put to a violent rest, and everybody in the land of fairy tales live happily ever after. 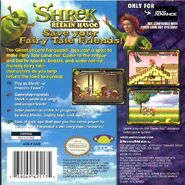 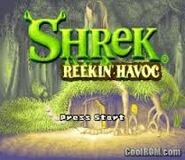