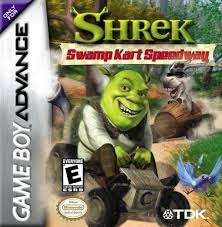 Shrek: Swamp Kart Speedway is a kart racer released in 2002 for the Gameboy Advance. It plays similarly to the game Mario Kart: Super Circuit, except with Shrek locations and characters. The game has been heavily criticized for its bad controls, handling and overall sluggishness. It is highly regarded as one of the worst IP-based racing games, only taking second place to another notorious game, M&M's Kart Racing.

Box
Add a photo to this gallery
Retrieved from WikiShrek (shrek.wikia.com), the wiki all about Shrek.
Community content is available under CC-BY-SA unless otherwise noted.