Shrek Kart was a racing game developed by Gameloft and exclusive to IOS devices. It was first released on October 9, 2009, and taken off of the app store around 2017-2018. The game featured the main cast of characters from the movies, racing through various tracks (either based on locations from the films or entirely new areas).

While a storyline was only established in the game's intro, it still gave insight as to why the characters were racing. As told by an off screen narrator, Humpty Dumpty got a major injury after falling off a wall. Due to the intense damage, his hospital bills exceeded the amount Humpty could afford. In an act of charity, the kingdom of Far Far Away decides to hold a racing tournament to raise money for Humpty's debt. Shrek, along with his friends and family hear about the tournament, and accept entry. Each racer would create their own makeshift karts, and race in the "Ye Grand Racing Tournamet" to claim the title as the "Kingdom's Fastest Racer".

The player doesn't actually control the racer, instead they only make turns and launch items. Otherwise, the character accelerates by themselves, with speed being determined by their stats.

The game was received positively upon release, which continued well into its final years. Usually gaining 7/10 scores from sites like IGN. This made the game the highest rated Shrek racing game. 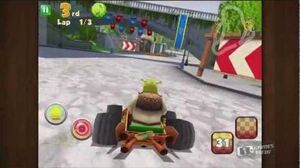 Shrek Kart™ - iPhone Gameplay Trailer
Add a photo to this gallery
Retrieved from WikiShrek (shrek.wikia.com), the wiki all about Shrek.
Community content is available under CC-BY-SA unless otherwise noted.