Snow White is one of Princess Fiona's friends. She has a talent for singing, which she uses to charm animals and make them follow her orders. She is shown to be very proud and vain, even boasting how she won Fairest In The Land from the Wicked Queen.

In the first film, Snow White cameos as one of the fairytale creatures to be banished to Shrek's swamp. She is shown sleeping inside her coffin and being handled by her seven dwarves. When Lord Farquaad is forced to choose a wife, Snow White, seen sleeping in the glass coffin, is his second choice.

When the Fairy Godmother tells Shrek that ogres do not live happily ever after, she uses Snow White as an example. Snow White makes an appearance in the Shrek 2 video game, where the player has to rescue her from the Fairy Godmother during Shrek and Donkey's Hero Time. Her coffin can also be found in the mine section in the original PC version.

Snow White appears more prominently in Shrek the Third, dressed in red. She becomes friends with Princess Fiona, Queen Lillian, Doris, Cinderella and Sleeping Beauty before the events of the film. At Fiona's baby shower, she gives Fiona a dwarf as a gift to babysit the triplets, saying that she has six more at home. She escapes from Charming with Fiona, Queen Lillian, Doris and the other princesses. She's later betrayed by Rapunzel and imprisoned in a dungeon.

Fiona encourages her and the others to show some initiative, and they manage to escape and head towards the castle. She sings (a lá Adrianna Caselotti who voiced Snow White in the Disney film) to summon the animals of the forest and commands them to attack the guards. Her plan works and they enter the castle grounds, avoiding the knights guarding it. Snow White, along with the other princesses, Doris and Queen Lillian, arrives just in time to stop Prince Charming from killing Shrek. After Charming is defeated, she's seen in the background, talking to the other princesses, Doris and Queen Lillian.

Snow White was a major subject in the episode "Team Cinderella or Team Snow White?". It was revealed that she had been seeing Prince Charming after his break-up with Cinderella. She even went as far to have woodland critters make her a wedding dress for Charming (even though he never proposed to her). Shrek endorses #teamsnow saying that Snow at least "keeps her shoes on".

Snow White can summon animals and communicate with them through song, and sometimes does so unintentionally. When the princesses carry out their plan to rescue Shrek, she summons a horde of animals by singing, and orders them to attack the Evil Trees at the front gate.

Snow White, unlike her traditional characterization, is portrayed as being vain, sarcastic, and prudish. At Fiona's baby shower, Snow brags that her gift is the biggest because she loves Fiona the most. As the princesses escape through the sewers, she complains that their situation isn't "working" for her, causing Beauty to accuse her for always making things about herself. Snow dismisses Beauty as just being jealous of the fact she was voted the "Fairest in the Land". Rapunzel mentions the rumor that the voting was rigged, and so in turn Snow makes fun of her long hair for just being hair extensions.

After being jailed, Snow complains that they could have just stayed put and carried on with their normal routines (having tea parties and similarly stereotypical "princess" behavior), claiming to not care who's in charge. At first she is content just to wait to be rescued, as normal for fairytale princesses. She belittles Doris' looks, calls Puss and Donkey "circus freaks", and dismisses Lillian as just an "old lady". Despite this, she’s loyal to her friends and joins the other princesses in the effort to stop Prince Charming and save Shrek.

According to other Shrek the Third media, Snow White was actually voted "Fairest in the Land" three times in a row.

Snow White has short black hair (blonde in the Shrek 2 video game) with a yellow ribbon, white skin, red nails, red lips and cheeks and light blue eyes, and is seen wearing the same dress throughout her movie appearances. An exception is that in the first Shrek movie, her dress has white sleeves, while in the third movie, her dress sports purple sleeves to match her skirt. She has a heart tattoo on her arm with Dopey's name inside it, which can be seen when she and Sleeping Beauty tear off their sleeves and skirts respectively. She was originally planned to have long hair and wear a pink outfit in Shrek the Third before her design was changed.

"Dead broad off the table!"

Snow White as shown by the Magic Mirror 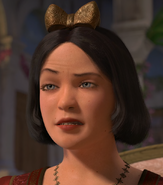 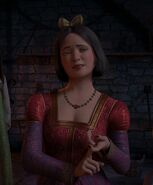 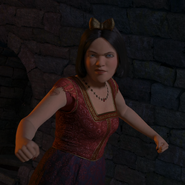 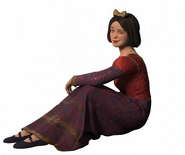 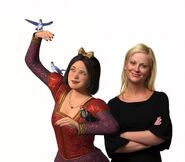 Snow White in the Shrek comics