WikiShrek
Register
Don't have an account?
Sign In
Advertisement
in: Television series, The Adventures of Puss in Boots, Articles that need to be Wikified

The Adventures of Puss in Boots 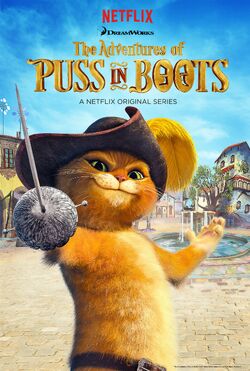 Set before the events of the Puss in Boots movie, Puss, our favorite feline hero, decided to live some other adventures before retiring to live happily with his friends but he accidently takes down the protective barrier around the mythical town of San Lorenzo. After his mistake he swears to restore the protective barrier. To do so, in the end, he must pay the ultimate price to save his friends and the world itself.

Puss in Boots discovers a secret town called, San Lorenzo and meets all of it's colorful characters. When Puss accidentally breaks the town's protective spell, he vows to protect the town from robbers and villains. With the help of his new friends, Dulcinea and Artephius, Puss discovers all sorts of magical places, artifacts and becomes the hero that he was born to be.

The Bloodwolf has been summoned, so it's up to Puss and Dulcinea to go on a quest to find pieces of the Crown of Souls.

With the Bloodwolf defeated, Puss believes everything to be alright not knowing that creatures are coming out of the portal to the Netherworld. Over the season Puss fights off the creatures, with the help of Dulcinea, Artepheus, and the other citizens of San Lorenzo, and attempts to close the portal. After failed attempts to close the portal Puss, Artepheus, Dulcinea, Toby, and Babieca. Upon arrival they find out they have gained new powers, all except for Puss. They find help from a resistance within the Netherworld to overthrow the ruler of it, The Blind Kind, and restore the old ruler, The Tiny Queen. Once they restore the Tiny Queen to power, she blocks the portal, but cannot close it. With the portal blocked and nothing able to get through, Puss and friends return home to find graves in front of the portal, their graves.

Upon finding their own graves at the end of Season 5, Puss and friend go to town to investigate what happened only to find out they were gone for a year, although for them it had been a few days. The town assumed them to be dead and had funerals. Once the people ofthe town found out that Puss had not died they returned to throw the bandits out of town. All is peaceful now in San Lorenzo, except lately there have been earthquakes, growing more in number and in intesity each day. Puss starts to looks for a way to stop these earthquakes only to find out that the portal to the Netherworld is unstable and that Earth and the Netherworld are bound to collide. After learning of thise Puss, Dulcinea, Cleevil, and Artepheus go to find the Great Mage Sino. Within the Forbidden Citadel they find a seemingly broken and evil Sino, but this was only one half of him, the other half being Artepheus. After both halves reunite Sino says they must find the Arcanum, the most powerful magic artifact, to try and stop this. Once they find the Arcanum Sino tries to stop the destruction to find out even it can not stop the world being destroyed. The world then breaks apart, but Sino uses his magic to save San Lorenzo. With San Lorenzo floating in space Sino devises a plan to send Puss back in time to stop this from ever happening by never going to San Lorenzo in the first place. Puss agrees on one condition: that he can keep his memories of his journies and of San Lorenzo, because if he never went to San Lorenzo they these events never happened. Sino agrees and sends Puss back. Dulcinea, before fading away to the new timeline asks Sino to send her back too with her memories so she can be with Puss, he agrees. At the end of the finale, Puss and Dulcinea ride off into the sunset together, leaving San Lorenzo and their friends behind.

Meet the Orphans - THE ADVENTURES OF PUSS IN BOOTS

-DELETED SCENE- Puss in Boots vs the Giant - THE DREAMWORKS DOWNLOAD