Christopher Knights
Thelonious is a (former) minor antagonist of Shrek. He is Lord Farquaad's former henchman.

Thelonious appears as a minor antagonist. He is a torturer and probably executioner under Lord Farquaad's service. In the Duloc Dungeon, he is ordered to torture Gingy by dunking him into a glass of milk to try to make him give up the location of the remaining fairytale creatures. When the Magic Mirror tells Farquaad that he isn't technically the king of Duloc, Farquaad orders Thelonious to intimidate him by smashing a small mirror. When Farquaad is deciding which princess to choose, Thelonious tells him to pick #3 (Princess Fiona), though he actually only holds up two fingers.

At Farquaad's wedding he is the ringbearer. He attends Shrek and Fiona's wedding and Shrek's Karaoke Dance Party, where he seems to have become friends with Gingy; his former torture victim. He also dances and sings along with the crowd.

Thelonious appears in Shrek 4-D, where he has become the henchman of Lord Farquaad again, but during the story he turns on Farquaad and becomes friends with Fiona, Shrek, Donkey, and Dragon. It is shown he can twitch his head like a zombie such as when Fiona attacked him.

Thelonious appears at the end sitting in the audience of the movie theater in Far Far Away.

Thelonious appears in Shrek Super Party as a playable character. His largest desire in the game is to take a nice vacation away from the torture chamber. If you win the game as him, he'll be seen in a makeshift island at the chamber.

Thelonious appears in Shrek Smash and Crash Racing as one of the eight unlockable racers in this game. His kart is the Black Horse and his personal item is a giant stone age axe.

Thelonious appears in Shrek: Fairy Tale Freakdown as an opponent and unlockable champion. His attacks include throwing hand axes, charging at his opponent and punching.

In Shrek: Reekin' Havoc, Thelonious is a boss fight in the Duloc castle, where he has been named the new king after Farquaad's death.

A portrait of Thelonious appears in Fiona's cell in the Shrek The Third video game.

Thelonious, though simple-minded, isn't really as villainous as he seems. When Fiona and Shrek kiss during her wedding with Lord Farquaad, Thelonious writes "Aawww" on one of the signs used for telling the people on how they should react.

On Shrek 4-D, he captures Fiona and takes her to the raft to kill her, but he is doing it only under the command of Lord Farquaad's Ghost. He accepts Fiona punching him in the face. When she kicks him in the groin, he falls overboard and she apologizes to him. He fell from the waterfall but grabs the branch below it. When Fiona, Shrek and Donkey fall as well, he shows his good side by catching them all in one hand while still holding the branch with his other hand until the branch breaks. When Dragon comes to help them, she takes all of them, including Thelonious. 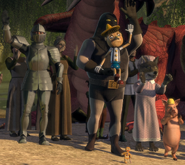 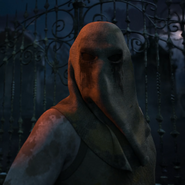